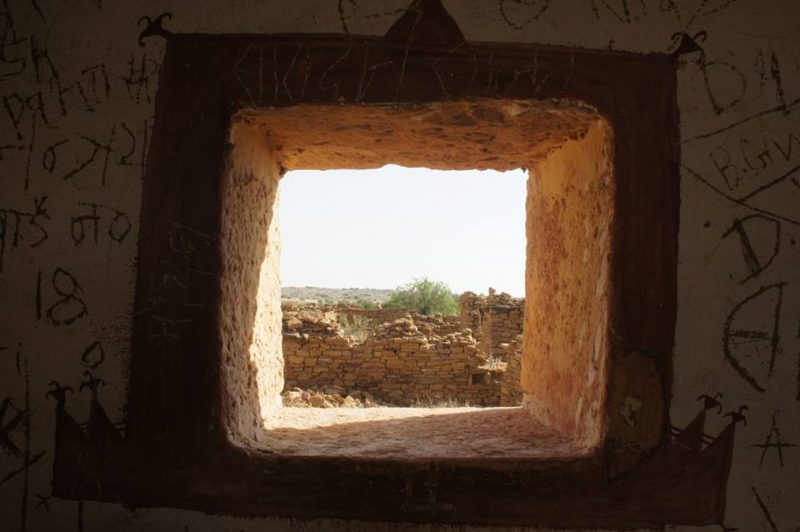 Around 300 years ago, a new Diwan took control of the desert town of Jaisalmer. With a new ruler come new rules. Salim Singh raised taxes in the villages that fell under his control. Wealth disappeared from the villages as quickly as respect for the new leader.

However, it wasn’t until Salim Singh demanded the hand of the daughter of a village elder when troubles started. Not being a man who makes demands lightly, the village had ten days to hand her over or face even higher taxes.

85 villages turned their backs on the Diwan as a result of his audacity. Within ten days the villagers had packed up and moved on to new settlements. To spite Salim Singh, the elder of the village of Kuldhara placed a curse on the area. No one should settle in the village until the end of time.

Or so the story goes.

As we passed through a modest settlement we took a dusty road before arriving in a square. There were a couple of tourist buses but its passengers had since dispersed into the ruins ahead of us. We were in Kuldhara, a place notorious for being the haunted cursed town of local legend. Bus loads of national tourists come here on a daily basis in search of Bhoot and a cheap scare.

We crossed a sandy square and were left to our own devices. Kuldhara, like most attractions in India, has no limit to where you can go. I stepped past a dome, presumably of historic importance, and into the shell of a home. Through the entrance room and into a walled space it doesn’t take long to appreciate that you are standing inside someone’s home. There are steps, crumbling doorways and painted window frames.

From the higher levels the expanse of the village is apparent. Ruined abodes still try to cling onto the present next to forgotten roads. There is a central temple, complete with handprints and intricate carvings that I can only assume is no longer in use.

For 500 years Kuldhara was a living village. It had seen wealth and trade but in a short space of time its residents abandoned it. Some say it remains abandoned as the result of a curse. Realists say that it is because of the unforgiving environment; water simply disappeared.

Either way there is a sadness to the village. Centuries of life have been left to crumble as tourists run around making loud noises in dark rooms. Bats guard cellars. Newer villagers are trying to rebuild the road and break that curse. Whether it is haunted or not, Kuldhara’s desperation can easily be felt. 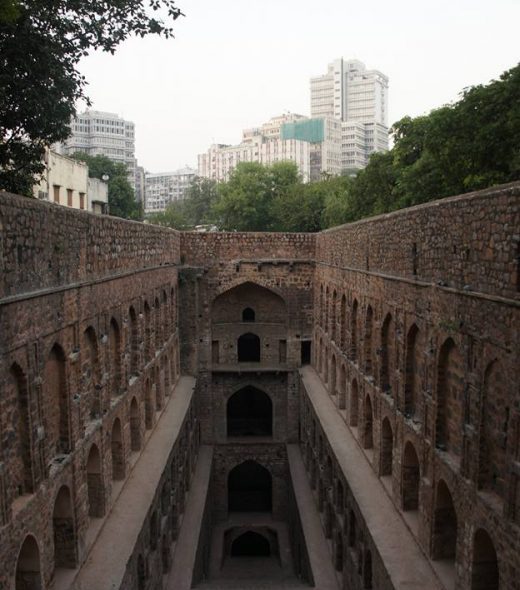 First things first, I am fully aware that an entrance to the underworld does not lie at the end of every dark path. But when hundreds of intricate steps lead to an abyss in the heart of Delhi, and you face constant barriers to get to the bottom, the mind can’t help but wander.

A baoli is a well. Back when freely running water was not so readily available, a baoli was built to pool the precious liquid from any source. As with most ancient architectural feats, beauty meets practicality. The result is an intricate stepped chamber that leads underground. Naturally, we wanted to explore.

Agrasen ki Baoli can be found fairly easily. It is central in Delhi, just south of Connault Place. Around some backstreets and past some stunning street art there is a small doorway. It is at the end of a vast wall and up a few steps. The extent of the structure beyond is extraordinary.

The first thing that got me was how high up we suddenly were. I have no idea how many steps were before us. There seemed to be levels as they led the way down. This would be, presumably, how the water could be accessed at varying depths.

Behind us, hidden under some trees was a long forgotten mosque. Opposite the triple arches that I have come to associate with ancient places of worship, sat a security guard. As is the case with most of these men dressed in blue at tourist sites, he didn’t seem too concerned about the droves of visitors. Now was the time to engage our inner Indiana Jones/ Lara Croft.

We walked along one of the platforms that lined the baoli. There were alcoves and a barred space ahead. The further into the well we went, the more we realised quite how high up we were. Bats chattered in the dark chambers ahead. Below, other visitors ventured down the steps and into what lay beyond. In my mind I made an itinerary. We will walk to the end of the platform, peer beyond the bars and figure out the engineering and marvel at the architecture. Then we would go to the bottom of the steps. Who knows what we would find in the darkness there.

A couple more meters along the platform and a piercing whistle echoed around the space. It was quite a sound, as though the Indian equivalent of a banshee had been disturbed. We turned around and saw the unenthusiastic security guard. He blew on his whistle like he was on some kind of commission. He frantically waved his hand at anyone who would look at him. Sheepishly we walked back – perhaps we weren’t allowed on the platform after all. But the guard was keen to stop the visitors who were venturing further into the baoli.

Despite his calls we followed other visitors down the steps. We had to see what was at the bottom, hidden in the darkness. Was it a further labyrinth of architectural wonder or simply a dark pit? The guard stopped us before we could really tell. He had something to hide and we weren’t allowed to find out what it was. We were asked to leave. Perhaps twenty-to-six is a normal closing time.

And so the baoli is left to our imagination. The vast steps, ledges and alcoves, in all its manmade grandeur can only hide a grand secret. Perhaps there is an entrance to Patala hidden in Delhi after all. 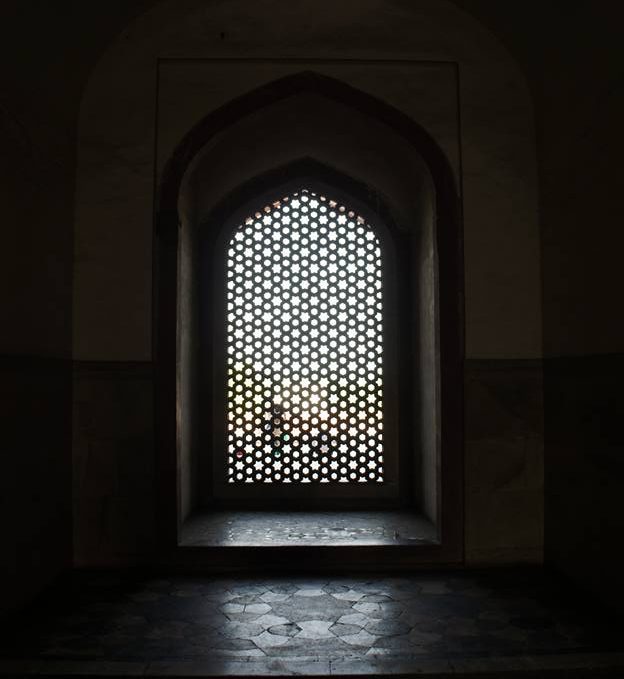 The democratic capital of India and home to over 25 million people, Delhi is every bit as chaotic as you’d expect. But still, the madness comes as a surprise.

After the quiet order of Amsterdam, in it’s cool European Autumn hitting the hot dusty streets of Delhi turned our world upside-down. Fortunately the city is vastly populated by good natured people – from the security guard at the airport who sorted out our transfer driver to the student from Jaipur who advised us on what not to eat on our first day. It would appear that everybody in this city is up for helping the tourists out. Sometimes it leads to a direct sell to join them in their tuc-tuc but mostly it’s for the self-satisfaction that they did a noble deed.

Beyond the death-defying drivers (our first tuc-tuc driver actually drove the wrong way down a main road at one point), constant smog and inescapable dirt, Delhi has its charms. Like most Indian cities its rich history still shines through historical colonial rule.

We explored Humayan’s Tomb, which has stood for centuries and even influenced the Taj Mahal. Allegedly there are 100 tombs within this beautiful monument, although we could only find 25. It does beg the question, what else is hidden within those ancient walls?

On the way back to Connault Place, Delhi’s answer to Picadilly Circus, we stumbled upon the inspiring Agrasen ki Baoli (more about the Baoli can be read here).

It’s almost ironic that we walked around ancient monuments in ‘New’ Delihi but found the “Old’ Delhi near the Red Fort to be a condensed version of modern India. It is fast paced, hot and loud. Pedestrians take no notice of the traffic, while each car, motorbike and rickshaw is looking out for itself – or the odd tourist to whisk across the city.

Delhi, for all its flaws, has given us the perfect introduction to India. Our senses are ignited and we cannot wait to see what the next town brings.