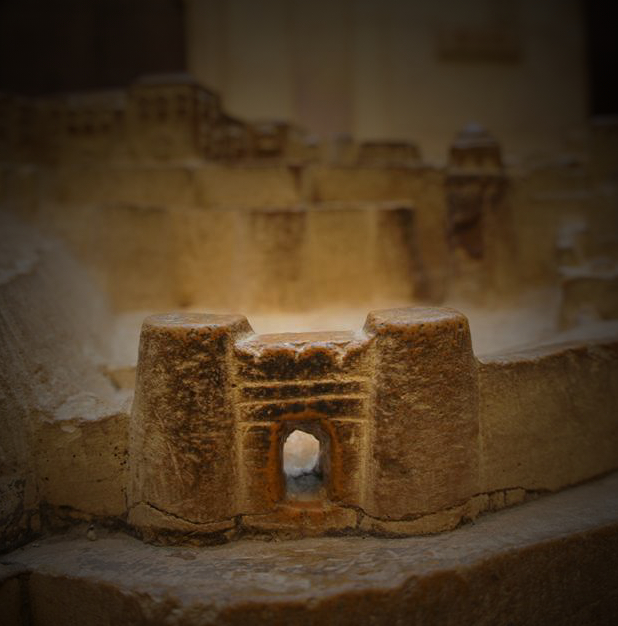 Situated close to the Pakistani border stands a mighty golden fort. In and around the walls of what may be the oldest living fort in the world is Jaisalmer, a town that feels like it is on the edge of India.

Like a giant sandcastle, the palace looks over a nearby lake and far off into the Thar Desert. From the highest point you can look down into the meandering streets of the fort and the impossible bazaar below. Cows, dogs and pigs battle for floor space with buses, tuc-tucs and jeeps. Yet, despite the unforgiving heat (it reached 35°C while we were there, and that’s the cool season) Jaisalmer is a lively town full of friendly faces.

To find out more of this ancient town – the fort was built over 800 years ago – we decided to take a wander around the palace. The history was fascinating. Centuries of rulers are all recorded and have left their individual marks on the place. We saw the palace of the Maharajah, and the palace of the Maharani. We learned about how water was kept in such an arid place and how art was brought in from the Mughals. But mostly, we will take away the distinct smell of bats.

With an aroma caught somewhere between sweaty hair and urine, every dark corner in Jaisalmer Fort is infested with bats. From the main archway under the palace to the ornate courtyards within it, there are bats. There are so many in fact that our tour of the palace turned into a walk through a ghost house. Between rooms and sculptures of the fort we walked quickly as flying rodents darted along corridors. As with most attractions of this nature the tour ended with a run down some dark steps with a ceiling thick with bats, that led straight to a giftshop.

As horrendous as I may make the palace sound it really was a thing of beauty. It set the scene for our stay in Jaisalmer and the surrounding area. Like the stuff of fiction, we went from an ancient, bat-infested, palace to a cursed village which has remained uninhabited for the last 200 years. All this before we spent the night in the open desert air as wild dogs fought each other. Jaisalmer really was a wondrous place.

Read about our visit to Kuldhara here.