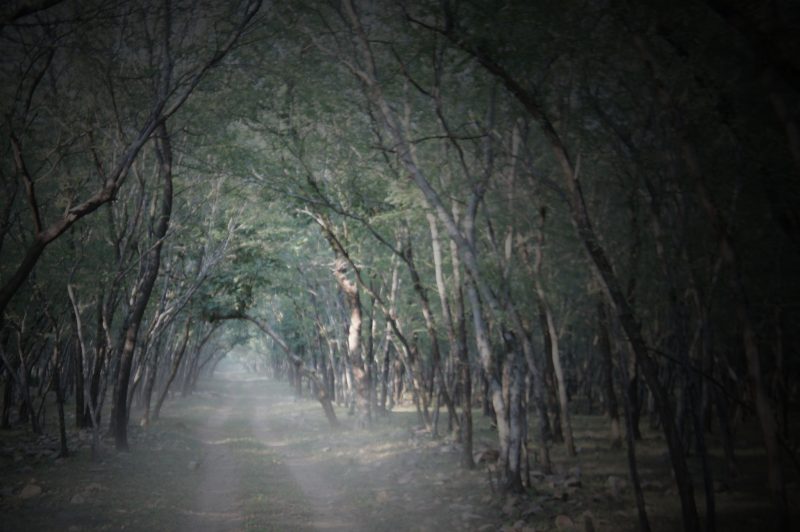 Imagine arriving in a small dusty town. It’s dark, you’re alone. A man, dressed all in black, offers you a ride on his motorbike. Your instinct tells you to say ‘no’, so you take a rickshaw. The rickshaw breaks down and the man on his bike appears, twice. This is when the rickshaw driver tells you that he is a ‘bad man’. You panic. The man knows where you are heading. The rickshaw doesn’t move. There is danger in the air, and you haven’t stepped into the jungle yet.

We booked a jeep as soon as we checked into our back alley hotel and it picked us up fairly promptly at dawn. We slept quite well considering we half expected the bad man in black to be standing outside our window/kicking down our door/robbing us and leaving us as tiger fodder.

Welcome to the Jungle

Sitting at the back of an open top jeep was exhilarating. Driving through forests with the dust kicking up behind us added to the thrill. Slowing down the ride with our eyes peeled for predators was the closest I think we’ll ever get to being in Jurassic Park.

There were distant boar, antelope, deer, peacocks and monkeys, but no tigers. Abby saw something crawl low under some bushes at one point. It could have been a leopard. The elusive striped cat was hiding for us that day. At the time, we did wonder if they ever saw them considering the noise created by the jeep. Our guide maintained that it was down the season, which is the hottest winter I’ve ever known.

While Ranthambore didn’t deliver the animals it was still a privilege to have been so close to them, in their natural environment. Nothing can take away the sense of peace that is in the Indian forest. Until the jeeps start their engines again.