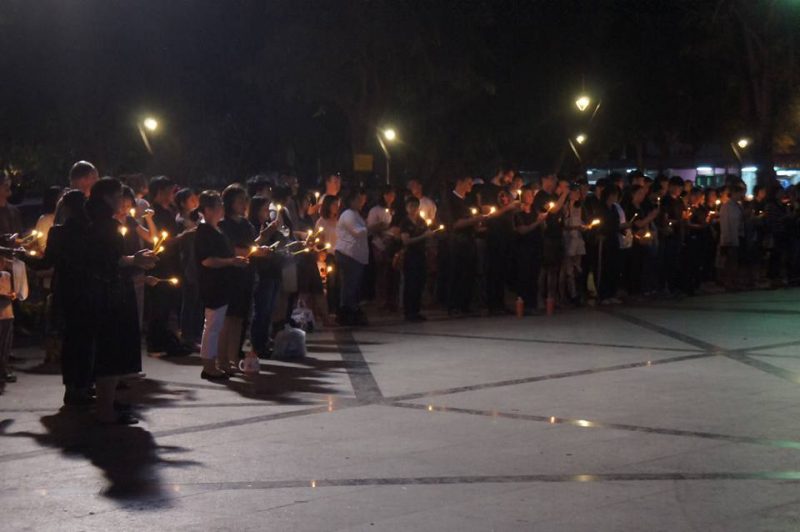 From the laid back island life of Sri Lanka we threw ourselves into Bangkok. For the first time in over a month we had a taste of modernity and certain comforts that we had almost forgotten about – the golden arches of fast food outlets; vast expanses of highly polished marble and glass where people worship designer labels and precious objects that shine in the Thai sunlight; a super fast, super sleek public transport service. In certain respects it felt as though we had stepped into the future, especially as the SkyTrain whizzed over our heads.

Bangkok is an Asian city that embraces the twenty-first century. Still, respect for the past is its backbone. Its ancient palace and historic floating markets must be on top of every tourists visit list. But nothing speaks as loud for Thailand’s inherent respect as their love for the late King Bhumibol Adukyadej.

There are monuments and memorials to the monarch everywhere. I do not use that phrase as a blanket for every other corner and leaflets at tourists information centres. The late king’s face is literally everywhere. From hotel foyers to tube stops; public shrines to elaborate graffiti, I have never seen a nation mourn with such passion. Two months since his death most people are wearing black or at least a black ribbon. Children and adults alike can be seen wearing t-shirts that affectionately proclaim that they were ‘born in the reign of King Bhumibol Adukadej’ (1950 – 2016).

What is obvious is that the love is real. Thai people are freely and openly mourning their beloved king. Abby reminded me of how they stood to respect him at the start of every showing at the cinema. I witnessed it myself when we went to see a film (as odd as it may sound, I highly recommend going to the cinema in Bangkok as part of any visit to the city) and we stood out of respect to remember the king. Emotions were running high in that dark room as we stood and watched two touching memorials. Quite a surreal experience just before Fantastic Beasts And Where To Find Them.

Even when we paid a visit to the notorious Khao San Road I seemed to offend a young man who we found ourselves drinking beer with because I said he looked like the king. Bit of a faux pas. But being English, of a similar age to him, I can’t imagine being so attached to our monarchy. Sadly, when our Queen – who since the death of King Bhumibol Adukadei is now the world’s longest reigning monarch – dies, I can’t imagine the United Kingdom would mourn in the same way. It certainly will not resonate across generations the way the Thai feel their loss.

It is certainly an interesting time to be in Thailand. I feel privileged to have been able such a delicate and true sense of humanity. As for the future of the monarchy it will be interesting to see how it pans out. I get the general feeling that the heir to the throne will not be so popular.

Beyond the public mourning and cinema, I was overwhelmed by the Grand Palace in Bangkok. It truly is an ancient marvel in the modern world. It’s also full of monsters and myths. Naturally, I got lost in wonder. Read about what I learned at the Grand Palace here.