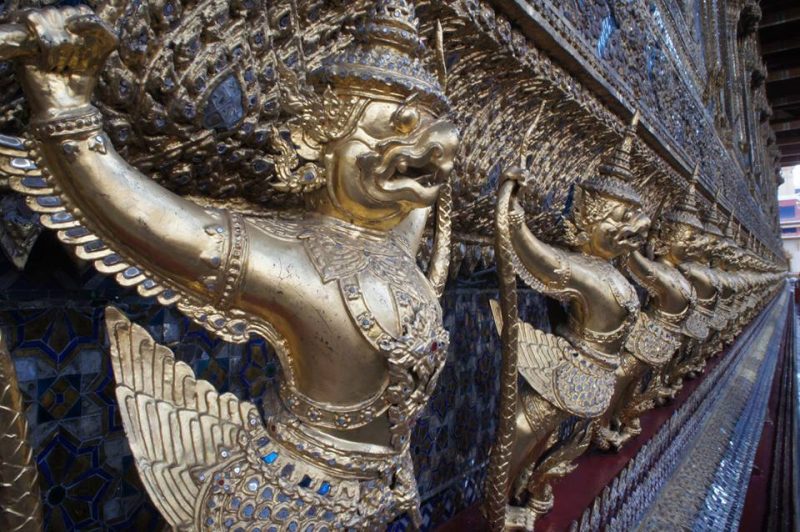 A little walk from the Chao Phraya River, and through some pretty strong security (remember to bring some ID and dress appropriately) we came to the official Thai royal residence, Grand Palace of Bangkok. Golden stupas glistened in the glorious sun. Perfectly manicured lawns stretch from vast gates. And hundreds of tourists jostled to pay their respects to the king.

It’s hard to be critical of the masses of tourists at a place like this. While it is true that certain elements of the site might get missed because there are too many people around it, it shows the importance of the palace at the time of national mourning. Abby reminded me that when she visited five years ago, there were half the amount of people there.

Despite the crowds, the palace did not fail to astound. From the giant mythical guards (Yaksha) to the miniature replica of Angkor Wat, it was a feast for the imagination. Behind opulent buildings, almost hidden from the centre temples, there is a mural that spans 178 scenes. Giants, demons and battles shine out in gold against the soft colours. All around the site there are statues of mythological creatures.

bird is the word

After some research into the creatures at the Grand Palace, I found that they mostly stemmed from Himmapan.  Originating in Hindu mythology, this forest is home to a wealth of creatures. The half human/half bird Kinnari have become some of the most respected characters from Thai folk tales. Effectively the Kinnari are angels that live near a hidden mountain in the Himalayas. Their songs and dances have worked their way into Thai tradition.

The more I read into Himmapan, the more I see how crucial it is to Thai life. Other creatures from the forest that have worked their way into daily Thai life is the mighty Singha. This guardian lion can been seen across the country on beer labels, amulets and even water.

Between a mythical mountain, half human/half animal creatures, demons, monsters and a wealth of legend, Thailand will certainly have an influence in Nechronicles somewhere along the line.