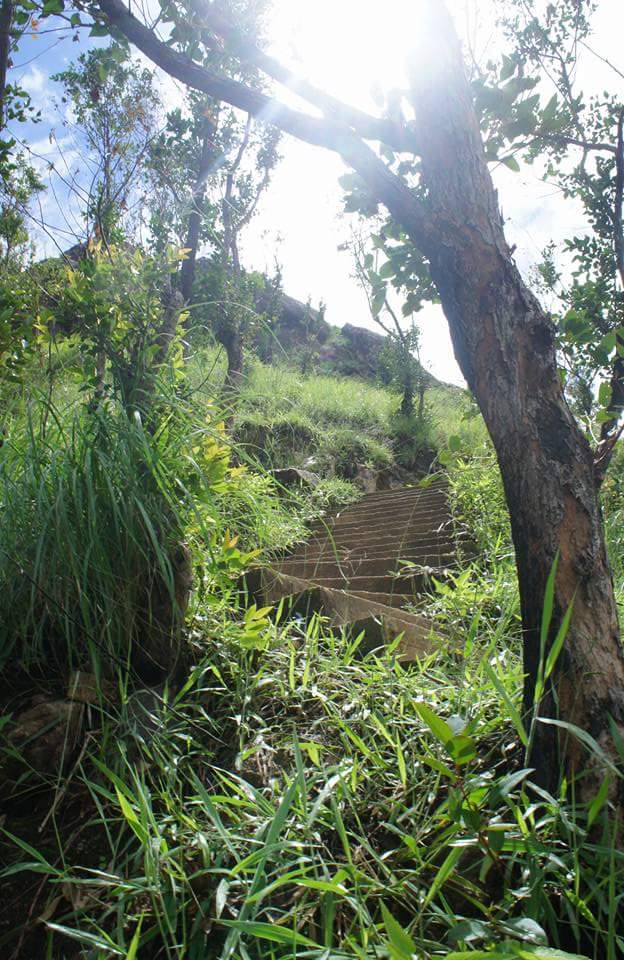 One of the main attractions for us visiting Ella was the high hill called Little Adam’s Peak. We had initially wanted to visit (the actual) Adam’s Peak but the logistics of getting there and seeing pictures of it on Google made us opt for its smaller cousin. I must stress that it has nothing to do with it being a strenuous trek up 7,300 feet.

We planned our circular route around Ella with the help of our host who had taken us to Dowa Cave the day before. We would take in the trek first, gently descending into tea plantations where we could stop for a quick cup of Sri Lanka’s finest before paying a visit to the famous Nine Arch Bridge that leads back to the town. While walking along the tracks is the only way back to town, there are only a few trains a day – we just had to time it right.

The 3743 foot climb was a great way to start the day. Through tea plantations and along a well trodden path we found our way. There were plenty of locals nearby who would freely point us in the right direction when we came to a fork in the road or looked the slightest bit lost.

The walk took us less than an hour and we were rewarded with the best views Sri Lanka has to offer. We could see for miles. Further hills and forest sprawled before us, pocked with waterfalls and lined with winding roads. With our taste for adventure not quite quenched, we scrambled over, down and along less obvious paths to reach the farthest tip where it felt like we had the whole country to ourselves.

We could easily have spent hours up in that space, breathing in nature and wondering how a couple of puppies came to find themselves rolling in the dust at the peak. But there was more to see, and I really fancied a cup of tea.

The descent was simple enough and we soon found the path that we had started out on that morning. Our host had told us that there was a tea factory that was open to tourists along this road. Confident in his recommendation, we passed one that was nearer to Little Adam’s Peak and went on our way.

About an hour passed and rain started to fall before we came to a large white building nestled in tea plantations. A long road ran from where we stood up to its door, and instantly we were transported back to the height of the Victorian tea trade.

We entered the wooden building and marvelled at the huge machines that were sorting the thousands of leaves that would pass through them every day. Although we couldn’t see any Oompah Loompahs, we were excited for the tour. We found a sink and promptly de-sweated before we made our way up the modest staircase and into some kind of tasting room.

A man greeted us, invited us to sit down and said that he would be back in a couple of minutes for our tour. In the meantime a woman came along with a steaming white teapot, two empty cups and served us some fresh leaves. The taste was crisp. The golden liquid was rejuvenating. We refilled our cups and waited to start the tour. We repeated this until the pot was empty and half an hour had passed. By this point, our intrigue of the magic of a tea factory had evaporated and our wet clothes sent chills down our spine. And we had to make it back to Ella before the train came.

We decided to cut our losses and carry on our exploration of Ella. But there was no one around to pay for the tea. We looked around the large room but we were alone. Short of walking down some steps that took us to the large driveway, our only option was to walk down the wooden stairs we had come up. The machines had stopped in the factory. In this small space we saw a single employee who we asked how much do we owe for the tea. ‘No charge’ came her sweet reply. After we made sure that this was the case, and she insisted that it was, we walked out of the building, down the road and towards the Nine Arch Bridge with a surreal feeling that we had stepped away from somewhere that should not exist in 2016.

The rain promptly resumed when we found the road and made our way back towards town. We very nearly missed the path to the train track, but fortunately and as ever, there were some friendly local faces who pointed us in the right direction. This happened more than once until we found ourselves taking a ‘short cut’ which was little more than a dirt track behind a restaurant and down through some trees.

Tracks of our Tears

Half walking, half sliding, we found the tracks. The bridge was worth the trek. It was a classic Victorian viaduct, much like the ones we’re used to in England, especially Brighton, except it was surrounding by lush Sri Lankan forest. Palm trees and banana plants swallowed the brickwork as it was lost to the jungle floor. We stepped onto the tracks safe in the knowledge that there was about an hour to the next train, and we only had about 1.5km to walk. It could be done. As soon as we stepped onto the bridge an old man who was sitting on the wall for some reason cheerfully reminded us that there was around at half past three and that we ought to be careful. We smiled, thanked him, and went on our merry way.

The walk was interesting and certainly not the kind of thing we were used to. We found that each track was about a stride apart, which sped up our pace especially through the bat infested tunnels. There was a life around the tracks. More than once we saw farmers leading their cows next to it to feed on the grass. People sat next to the tracks, there buildings. We took in this new environment, all the while keeping an ear out behind us for the rumble of an incoming train.

Minor panic hit when we heard it from a distance. We sped up our pace to a safe area before the next bend. There was a stretch of green with a tea factory below it. It wasn’t until we got to this area when we realised that the rumble that had panicked us was actually the sound of the machines in the factory doing their thing. We did find it a bit odd that a train would be running twenty five minutes early. Relieved but not complacent, we decided to get back to Ella as quickly as possible.

The rest of the journey passed quite quickly. Another track appeared next to us and merged with the one we were on. We turned one corner and saw Ella train station. There was a train at its platform. The engine was running. As a salute to our safety, the driver sounded its almighty horn which tore through us and echoed along the path we had just come from. He laughed at us and waved moments before the train slowly pulled away and we had reached a safe distance from the tracks.

Safe and exhausted we saw the train pass us, grateful that we had not delayed any further getting to the bridge. We went for a well earned beer and planned our route to Kandy.