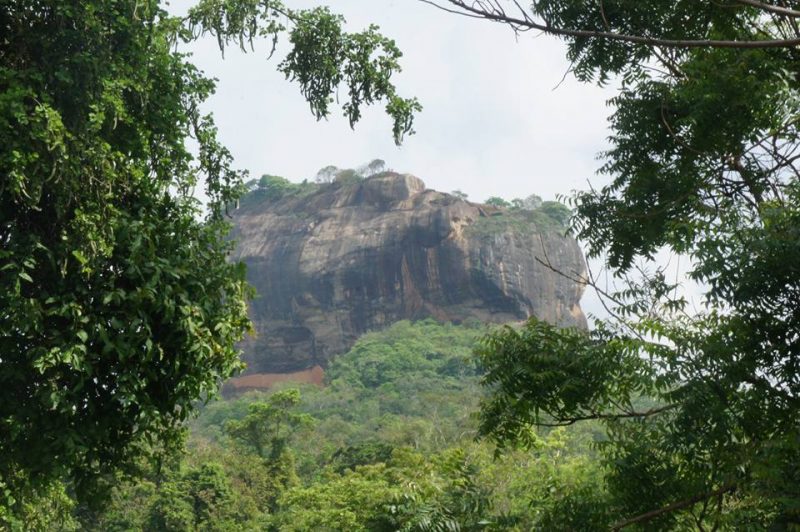 One of the must-see-attractions of Sri Lanka is a huge rock. Sigiriya is situated north, about 90km from Kandy and is worth the two hour to three in a bus. What makes this rock special is its history. King Kasyapa founded a royal residency at the top around 1,500 years ago, although it had been a monastery since the 3rd Century AD (more information can be found here). There are lions feet carved into the surface and some 1,200 steps to reach the top.

In a way, it’s a shame to travel so far and not see Sigiriya, even if you have made the journey and scaled it with the hundreds of other tourists. And when you’re up there, it’s hard to actually see the rock, if you know what I mean. We learned of another rock, Pidurangala, which is locally known as Sigiryia’s little brother. It is in the same park as the main attraction but doesn’t come with the $30 ticket price.

Of course, it’s not just me being cheap. Pidurangala has a rich history of its own. A buddhist monastery has grown at its base. In fact monks have been living in the caves around this rock for around 2,500 years. Half way up the rock lies what was once the largest brick Buddha in the world.

The statue looks fairly new thanks to restoration in the 1960s. This had to happen after some opportunists came searching for treasure. Around it are ruins of small rooms and dwellings, remnants of a smaller settlement. But as I said, this is only some way up the rock. Our inner Indiana Jones/Lara Croft had only just surfaced.

UP, UP and AWAY

I had noticed that the ground near the reclining Buddha looked a little less paved than the way we had just come. There was no evidence of helpful steps or paths. And forget about a handrail. Instead, a handy arrow had been drawn on the floor in faded red paint.

Following the arrows was the easy part. Climbing boulders, not so much. As we scrambled over the rocks, ignoring the slopes that dropped into oblivion, we were reminded by the brave few who had already made the ascent that the view was worth it. And it did not disappoint.

As we fell over one boulder and landed on a bit of a plateau we were rewarded with an exclusive view of Sigiriya. The magnificent rock rose out of the forest, proud, like the lions it depicted. And we could enjoy it as we allowed the cold sweat on our clothes to soak into our skin.

But we did not stop there. Up a couple more impossible ascents we came to the top of Pidurangala. As with our trek up Little Adam’s Peak, the country was ours to observe. Forests stretched on for miles. Statues and stupas popped up over the tree tops. Somewhere in there were the famous elephants, leopards and centuries of hidden history. It was a humbling feeling, and our last opportunity to appreciate the wild Sri Lanka.

It was an island of diversity and friendly faces, with a different flavour to India. But our journey into South East Asia had only just begun.